Romance on Valentine's Day and Every Day! 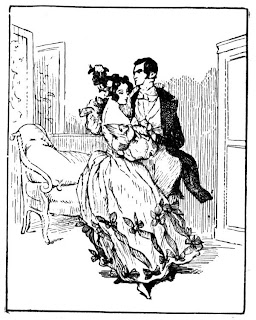 People think it must be easy for a romance author to write about something as obvious as Valentine's Day, but I guess it's as difficult for writers as it is for everyone else. I mean, what can I write about the ultimate holiday that celebrates love in all its wonderful forms? So to celebrate this day of hearts and flowers, I've clipped a love scene from one of my current projects to give you a glimpse of love in Regency England! This is a scene between Mary Bennet (the middle sister from Pride and Prejudice) and her fiance, Frederick, who happens to be drop dead gorgeous and an earl, to boot! They're playing the piano together in the middle of the night. It's a piece she wrote about him.


A log on the hearth collapsed with the muffled sound of rustling autumn leaves. He’d stoked the fire earlier, but it was almost dying. She wondered if she should light a few lamps–perhaps all of them, and some candles, besides, but then decided against it. There was a magical quality in the air, hovering around them. Light would only disturb the moment.
“This part rather hangs in the end,” he said suddenly, his eyes focused on the page while his fingers continued to work through her notes. She blinked.
“Does it?”
He nodded, seemingly unaware of her tumultuous feelings. “Tell me what you saw when you wrote this. In your head, I mean. Is this Everhill?” He played a few chords, and then looked at her expectantly.
She stifled a laugh. “I do not remember what I saw in my mind. I was just thinking of…” Being lost in your arms, of running my fingers through your hair…She gulped. “It was just you.”
“Just me?”
His quiet voice matched the silent darkness all around them. The fire crackled in the hearth, then seemed to go silent, as if the inanimate room waited for her reply.
“Just you.” Her response had been a throaty whisper. She took a deep breath as if she were preparing to swim across a lake. Her left hand slipped off the keyboard and linked with her right, which remained in her lap.
She felt one of them should look away first, and quickly. Something was about to happen, and she didn’t know if she should try to stop it, or even how she could.
His eyes glowed in the dim room, burning flames of their own. He moved closer to her on the bench, taking the last eighth of an inch. Heat emanated from his body until she felt his warmth through her dressing gown and nightgown, and finally, to her bare skin. She hadn’t realized he’d taken her hand until he pressed it to his lips.
The pressure of his mouth against her palm increased to a defined kiss. This was no repeat of mocking Jeremy’s attempt. Her breath seemed trapped in her lungs, and she arched toward him. He curved her fingers around his cheek, the rasp of his whiskers grazing her skin. She longed to touch him of her own accord, to stroke his silky-looking hair and the straight slope of his nose, but her hand was captive.
Unable to bear not being in his arms any longer, she slid her free hand up his arm, feeling the muscles contract until she reached his shoulder. He slipped his injured arm around her back and drew her close, releasing her hand in another instant to tilt her chin as his head dipped down.
She had never anticipated a kiss before, yet instinctively knew what to do. She pressed her hand to his chest, her fingertips inadvertently slipping between his shirt buttons so that she felt his heated bare skin. His breath fanned her cheek with short, quick puffs, and his heartbeat pounded against her palm.
The tips of their noses touched, and then his head turned slightly. The feather touch of his mouth against hers sparked something deep inside her, and she murmured his name. That action parted her lips, and it was all he needed. His lips were gentle but firm, tasting and teasing her until she kissed him back, her head reeling with the rapid onslaught of sensations his kiss aroused.
Hope that puts everyone in the mood for your own personal love story! May it be filled with hugs and kisses, candy hearts and roses! (And someone else doing the dishes for a change.)
Posted by annasmallbooks at 3:46 PM