I found this wonderful site from the University of Austin in Texas that takes you on a guided web-tour of an art exhibit that Jane Austen actually saw on May 24, 1816. Click on the link below, and go through the exhibit in a leisurely fashion. Leave the children with their nanny or governess, and tea and cakes will be waiting at the end. I'll be sure to have a barouche waiting outside the door to whisk you to Grosvenor Square, where a supper party awaits! 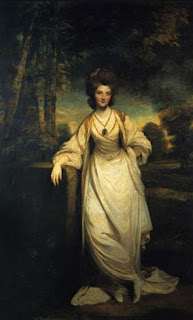 After the "Happily Ever After"

Did you ever watch a movie that ended with the prince and his new bride riding into the sunset while a soaring orchestra played them off the stage? The audience goes home, content with the idea that the happy couple will only have bright days ahead. Or maybe the audience didn't care anymore - after all, the pursuit of happiness is what some people want to see.

It occurred to me that most of my novels have a marriage in the early half of the book. It's usually a marriage of convenience, such as in Tame the Wild Wind, when Jed suggests Cassie marry him to keep her uncle from tearing her away from the ranch she loves. Of course, his ulterior motive is to secure himself to her so she won't take him to court, thereby exposing him for who he really is! In my new book, In the Arms of an Earl (available in paperback June 7th!), Jane and Frederick marry for love, but their trials begin after they say, "I do."

Some readers don't like weddings early on in the story - they see the wedding as the reward for persevering with the characters throughout the pages. I wondered why I like all these rushed weddings and I realized it happened when I was very young, watching Cinderella for the first time. Once the carriage pulled away and Cinderella waved goodbye, all I could think of was, what happens now?

Did they have kids? Did they live with his father? Was the evil stepmother a wicked stepmother-in-law? There were so many unanswered questions!

I used to "finish" fairy tales and romantic old movies with my dolls, making them pick up where the movie or story left off. Prince Philip awakened Sleeping Beauty with a kiss, and then in my world, they had lots of parties, explored all over Europe, and moved into their own castle. Snow White, ditto. I still like to imagine what happens after the curtain drops and the movie or story or musical is over. Sometimes, it even inspires a new story of my own.

I know other readers and authors feel the way I do. Some of my favorite romances involved plots where the couple was already married through a good part of the book. Eloisa James's This Duchess of Mine begins with an estranged husband and wife, and Lavyrle Spencer's classic, Twice Loved, was the story of a husband who was presumed dead and returns to claim his bride.

So, forgive me, gentle readers, if you'd rather cut the cake at the end of the book. Once I got married, I noticed my plots and characters have changed as I did. As any modern wife knows, there's more to come after the wedding gown is put away.

But that doesn't mean it's anything but exciting! Just a new adventure waiting to be had!

Posted by annasmallbooks at 8:46 PM No comments: