Read a New Excerpt at Romancing the Book and Win!!!!

I'm a guest over at Romancing the Book, where I'll be giving away 3 FREE ebooks of my newest contemporary romance, BACK IN HIS ARMS AGAIN. All you have to do is stop in and leave a comment to win.

Go to: Win Me A Free Ebook!

Are there any themes for a romance novel that you wish an author would write? Cinderella with a vengeful streak? Little Mermaid who turns the human into a merman? I have been working on a time travel story where the Jersey girl heroine goes back to medieval times and turns the place upside down with her sass. What do you think?
Posted by annasmallbooks at 1:42 PM No comments:

I'm not going to write about writing today, or tell you about my new book. Instead, I'd like to share the fun and excitement my family had today while SCUBA diving at the Blue Grotto in Williston, Florida. It's located less than 2 hours from home, but it was like traveling to a different world as we went deep into the verdant, lush farmland of the central Florida countryside. We passed so many cows I was looking for the Chick Fil-A sign.

Our daughter (15yo) has been SCUBA certified for 2 years now, so this was a nice refresher for her in advance of the Caribbean diving we plan to do this May. But the main thrill today was our 9yo son getting to dive in a deep, controlled environment. He just passed a PADI Bubblemakers course with flying colors and has been using our dive equipment in our pool for some time, and has been dying to dive like a real pro! With careful coaching by Mom and Dad, he made it to a steady 40 feet without kicking up the silt on the bottom. He even got a close up look at the friendly turtle, Virgil, and several little fish.

The reason I wanted to write about this event is to share the fresh excitement we all felt about diving today. Hubby and I have been diving for almost 15 years, but now that the kids are involved, it makes every vacation filled with possibilities. Because a 9yo has endless energy, we will all have an untiring, eager dive buddy in him (when he is fully certified, which will be in a few months), and our daughter now has another skill to rely on in life.

Diving isn't for everyone, although I have seen people who are missing a limb, in their upper 70s and older, and people so out of shape you wonder how they can even make a wetsuit that big. But the point is, divers are having fun. They are exploring a world few ever see. The thrill of having a sea turtle ignore you from a foot away or having tiny yellow fish surround you and poke at your mask is an experience most people will never know. I feel like a mermaid down in the deep blue, which refreshes my creative juices and opens my mind. It's hard to think of much of anything when you're floating on a cushion of water, gliding through the cold, crisp water of a millennia-old sinkhole.

Whatever your passion, do it often. Like to cook? Buy a cookbook you would normally never be interested in and have a dinner party. Crafting your hobby? Make bazaar gifts and donate them to your local church or women's group. Do what you like, and do it with all your heart. Writing is the big passion of my life, and I'm never happier until my fingers are tapping out the drama, lives, and loves of the people who live inside my head.

Well, there - I did mention writing! Why not write back, leave a comment about YOUR great passion?
Posted by annasmallbooks at 3:41 PM No comments:

Warm Up Your Winter With A New Book!

My short novella, Back In His Arms Again, is officially here! I love the cover and hope you will, too! Here's a new excerpt:


They climbed higher up the hill behind the house until they were well within the woods. The full moon illuminated the trees so much that she looked around for the spotlights. Puffing and out of breath, she leaned her hands on her knees when he stopped at last.
“What’s the matter?” Ben asked. “Don’t you go to a trainer anymore?”
She shook her head and sucked in a cold lungful of air, regretting it a moment later. “No, I gave him up. I haven’t worked out in weeks.” It was really four months, but she didn’t want to tell Ben the reason she’d stopped working out, and going out, for that matter, was because she’d found out the income stream she’d depended on for so long was drying up and she had cut back all her spending.
“Well, you can’t tell. You look…” He stopped, and she wondered if his ruddy cheeks were from the cold night air or embarrassment. “You look just the same as when I saw you the first time.”
She snorted and shook back her hair, which had come out of his wool cap she’d grabbed on the way out of the house. “I don’t look seventeen anymore, Ben, but I’ll buy you a drink for saying so.”
The corner of his mouth twitched in what might have been a ghost of a smile. “I don’t drink anymore, but you can buy me lunch once the snow melts and we can actually make it into town.”
“Oh, goody! Elk burgers sound wonderful.”
“Don’t laugh! We might be eating them soon if a thaw doesn’t come.” He started walking again. “Come on, slowpoke. We’re almost there.”
“Where are you taking me?” Falling into step beside him, she immediately sank into a deep pocket of snow and yelped. He dropped the saw and grabbed both of her hands to pull her out.
She looked up at him. “So, this is your wicked plan.”
“What plan?” He waited until she was standing on firmer ground before releasing her. For a moment, she’d felt the hard pressure of his fingers around hers, and a shot of electricity had nearly stunned her.
“You’ve lured me all the way out here so you can…”
His blue eyes reflected the moonlight off the snow so that they were no longer blue, but silver, like the eyes of a wolf glowing in the darkness. She forgot her joke, and it was just as well because he didn’t look as if he wanted to hear it.
“So I can what?”
He stepped closer. Or maybe she had. She wasn’t sure anymore.
A drifting snowflake fluttered across his eyelashes and he blinked. Before she could think, she reached up and brushed it off. His warm breath turned to mist in the air, mingling with hers. She stared up into his eyes while a torrent of emotions sang through her. Matt had never looked at her like this. His eyes never went all sleepy and dreamy when he was about to…
Good grief, was her ex-husband about to kiss her?

It seemed natural to slide across the foot or so of snow separating them and fall into his arms.

Want to read more? Click on the book cover picture to the left, and it will take you directly to Boroughs Publishing's site. Or, purchase from Amazon or at All Romance Ebooks.com.

Thanks for stopping by!
Posted by annasmallbooks at 1:13 PM No comments:

PREORDER AVAILABLE! Back in His Arms Again out this Friday!

I was thrilled when Boroughs Publishing told me BACK IN HIS ARMS AGAIN would be out 2 weeks ahead of schedule. Isn't the cover great? For ordering info, please click the link below and it will take you to Boroughs' page. At 99 cents, it's a real bargain. 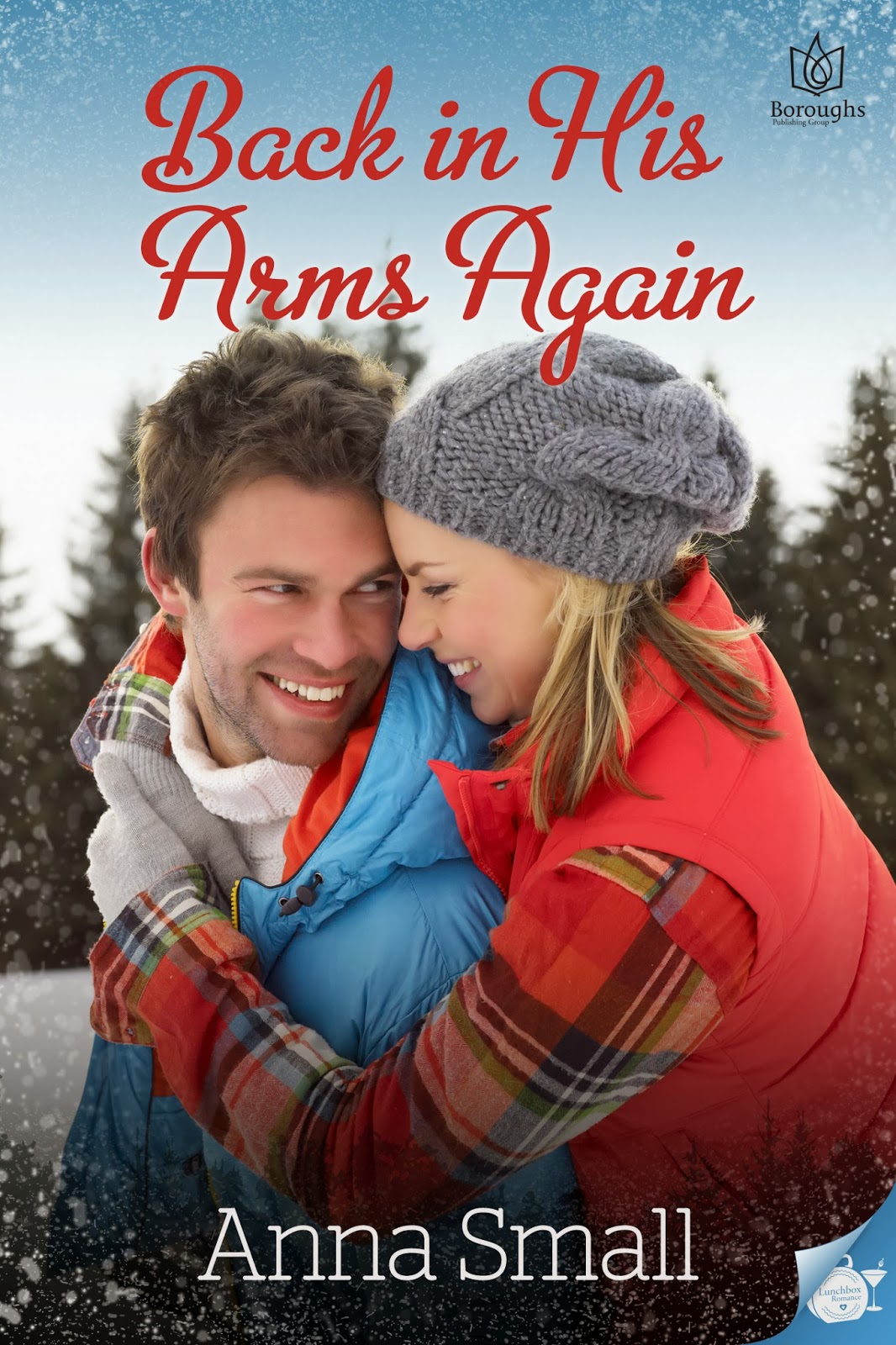 Thanks for stopping by! I'll get busy with my new vlog so you can have a glimpse into my chaotic life. I'll also have some updates soon about my new Regency Historical romance, How to Marry A Rogue, which will be out this summer.

Posted by annasmallbooks at 6:59 PM No comments: